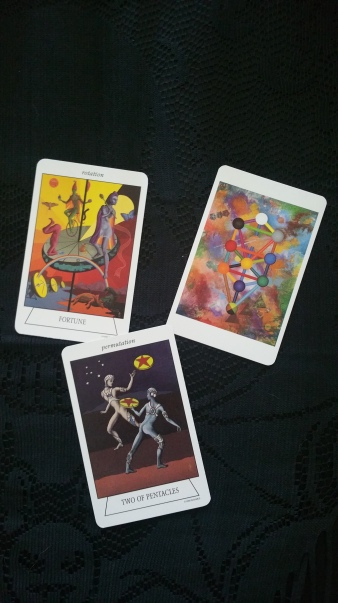 I can’t talk enough about how much I love this deck.

I haven’t seen a lot on the internet about this deck. I stumbled upon it cruising through Amazon one day (you know where you end up down a rabbit hole based on what other people are viewing and Amazon’s suggestions?). There is actually a companion book that goes along with this deck but I haven’t been able to find it for a reasonable price. The deck itself is very easy to come by. I believe I only paid about ten dollars for my copy. The book on the other hand has been out of print for awhile and from what I have seen it has been selling for the upwards of one hundred dollars.

This deck is heavily inspired by the Qabalah (just look at the back of the cards!), which for me is fantastic since much of my magical workings and meditations revolve around the Qabalah. This deck is partially based upon Aleister Crowley’s Thoth Deck. Some of the majors such as the Temperance card are renamed the same name as you would find in the Thoth Deck. 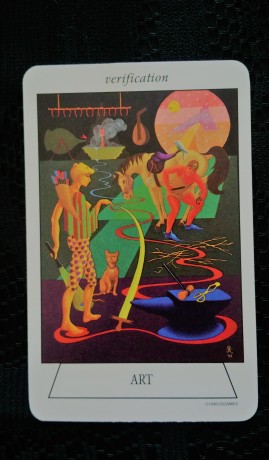 The artwork on this deck is phenomenal. It is very psychedelic. The images in this deck make me want to step inside this weird and crazy world. These cards can be a bit overloading. The symbolism is rich. When you get this deck your going to need to sit down and slowly examine each card. This is not a novelty deck by any means. This is one that takes itself very seriously. The keywords on the cards are a huge plus. I have heard of other people actually cutting the corners and removing these. I think these add a special touch. Sometimes I will use this deck as my daily card pull and just reflect on the keyword associated with that card. I’m still getting to know this deck, it continues to surprise me. I The card stock can be a little sticky at first and this deck isn’t in a conventional size.It is a little bit shorter and wider than a standard deck.  After a bit of using it starts to shuffle like a dream. Nothing about this deck follows and norms you would associate with tarot. I also wouldn’t describe this deck as following strictly the Rider-Waite tradition. If you someone that relies heavily on the Rider-Waite imagery to read or if your someone who just prefers that traditional imagery then your going to have a hard time with this one. At the same time I think it can be a valuable tool to a beginner for the keywords. They really allow you to explore and form your own feelings and interpretations about each card.

I really wish there was more on the internet about this deck. I feel that it is really under rated – which is why I decided to do a review and give it the credit it deserves!

This deck was designed by Julia Turk. I can’t find much information about her other than she seems to be a very interesting and a bit eccentric artist. I wish she would produce more decks. I’m sure her brain is a treasure trove of information.

Go out and get this deck people!